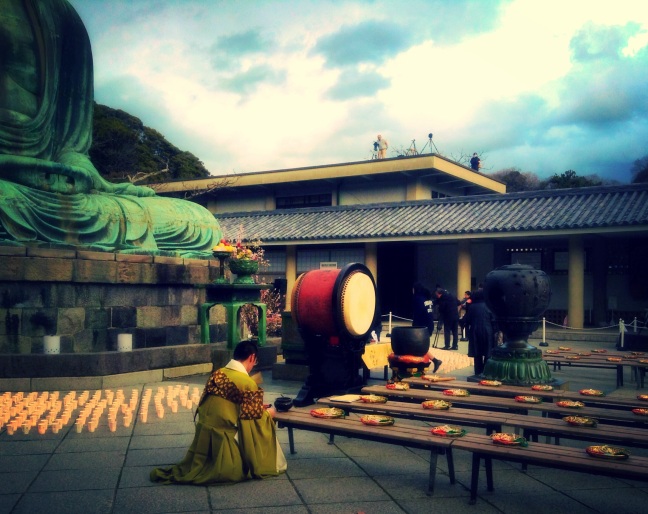 Kotoku-in, AKA the Daibutsu, has held a special mantoukai (Buddhist lantern ceremony) for the past few years to pray for those affected by the 2011 Tohoku earthquake and tsunami, and to raise funds. Monks from various Buddhist sects gather at Hasedera and walk ever-so-slowly to Kotoku-in, which is lit up with candles that spectators sponsor.

This year’s mantoukai was last night, March 10, and I had no idea until mid-afternoon. Though I’d seen posters around town for a lantern ceremony, I didn’t realize what it was all about until three guests from Myanmar/Burma came to stay. One of them is a Buddhist monk who participated in the service.

I ended up going alone, as it was a little too cold for Kaede, not to mention threatening rain (a little of which did fall). Listening to the monks chant was something else—I’ve heard a handful chant before, but never a group this big. All those deep, strange voices resonated something fierce. And all the while, the Daibutsu kept silent watch over us all.