Sometimes, you’ve just gotta smash a plate, but where? And what will the neighbours think?

We’ve all been there, right?

Luckily, Kuzuharaoka Jinja has a small stack of clay dishes ready, and a big rock at which you can freely toss/whip/skip your plates. And all for the low, low price of ¥100 per plate. It feels good. And all the broken shards of clay piled around the rock look very satisfying. Yes, it’s well worth the hike to Kuzuharaoka. 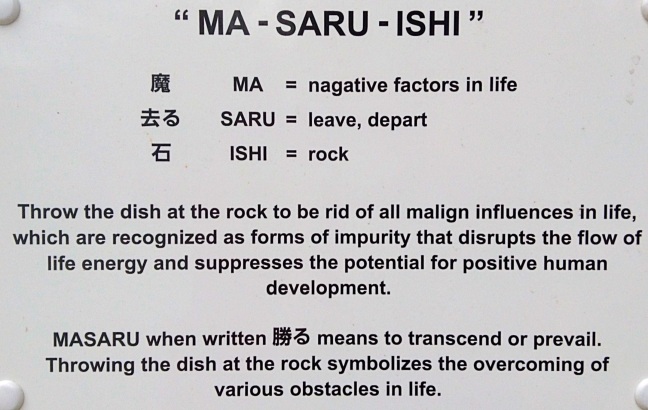 But the shrine isn’t just plate smashing—it’s got a few other not-often-seen items around the grounds, too. To begin with, at least three fairly sturdy-looking turtles in the pond. It also appears to be a shrine at least somewhat dedicated to love. The hope/wish tablets are heart-shaped, with “watashi” (I/me)written on one side, and “anata” (you) written on the other.

Last but not least is the big rock strung with five yen coins. One side is labelled “otoko” (men), and the other “onna” (women). I couldn’t quite figure out what was going on, but I’m definitely going to look into it.

Kuzuharaoka Jinja can be reached via the Daibutsu-Genjiyama Koen hiking trail. A hike and temple/shrine jumping make a good combination—visit the Daibutsu, then head up the big street that runs beside it. Climb up the stairs just off the road to join the trail, and hike away till you reach Genjiyama Koen. Just beyond and to the left is Kuzuharaoka Shrine. Continue past the shrine some more to reach Jochi-ji (Jochi Temple), or turn around and follow the signs to Zeniarai Benten, the money washing shrine. Legend has it that washing money in the cave there will lead you to further riches. Interesting indeed…

From there, follow the signs back to Kamakura Station—or drop in at a few more temples and shrines along the way, like Sasuke Inari Shrine, located down a small street on the right-hand side of the road leading away and down from Zeniarai.