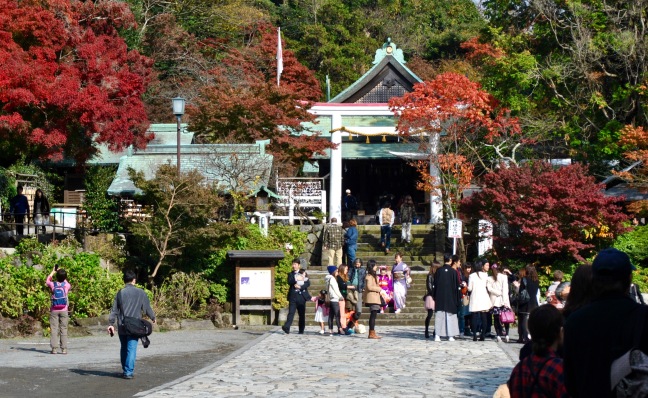 Kamakura-gu is one of Kamakura’s newer shrines, having been founded in 1869 by Emperor Meiji. The spirit of the shrine goes back much further, however, as it was established in memory of Prince Morinaga, who was imprisoned in a cave on the property for seven or eight months before being beheaded in 1335.

While the main shrine grounds are free to wander, the area behind the main shrine building — where the cavern entrance is — requires a small payment. There’s also a garden area; and a glass-walled building containing paintings, a huge statue of Prince Morinaga on a horse, and other knickknacks and oddities, in the paid area.

Kamakura-gu’s Setsubun ceremony in early February is a great one to visit with kids, as it has a special area where they can join the scramble for beans without worrying about being knocked down by bigger kids and adults. The shrine also has a bon festival in August.